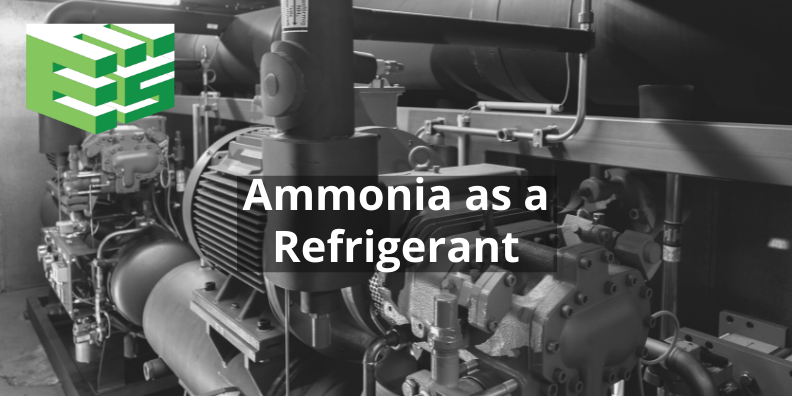 With today’s focus on protecting the environment, building owners should consider replacing traditional synthetic refrigerants with ammonia-based systems to save on utilities and protect the planet.

A naturally-abundant compound, NH3, ammonia is a highly-effective and low-cost refrigerant. Migrating building chillers from synthetic refrigerants such as hydrofluorocarbons (HFCs) to ammonia lowers monthly energy consumption while eliminating climate effects. As ammonia is present in nature, it does not have to be manufactured like HFCs, making it the best choice for industrial refrigeration.

“Ammonia is the preferred solution,” said EES Founder and CEO Pat Miller. “EES has been working in the industry for more than 40 years, and has vast experience with ammonia chillers, including a project at a global pharmaceutical manufacturing plant in Puerto Rico. We are experts in designing effective control systems to successfully mitigate ammonia’s inherent risks.”

The American Society of Heating, Refrigerating and Air-Conditioning Engineers (ASHRAE) supports the use of Ammonia. In ASHRAE’s Position Document on Ammonia as a Refrigerant it states, “[Ammonia] has remained the main refrigerant used in industrial refrigeration systems because of its superior thermodynamic properties and low cost…when released to the atmosphere, [it] does not contribute to ozone depletion and global warming. Ammonia is generally considered to be benign to the environment. ASHRAE encourages the continued use of ammonia for - industrial and commercial refrigeration, food preservation, indirect space conditioning, heat pumps and other applications.”

Ammonia is a pungent, colorless gas which is toxic to humans and has been used as a refrigerant since the vapor-compression refrigeration cycle was developed, around 1850. Before the advent of modern control systems, risk management for ammonia was difficult because a leak in the refrigeration system could result in poisoning.

With today’s increased focus on lowering ozone depletion and global warming, ammonia is emerging as the refrigerant of choice for many, including pharmaceutical giant Roche Group (see this article, page 22).

In industry association ASHRAE’s 2013 Handbook-Fundamentals, Chapter 29, Table 8, a chart illustrates the comparative performance of a variety of industrial refrigerants, including many synthetic refrigerants and ammonia. The column Net Refrigerating Effect shows that ammonia has between 3.4- and 11-times higher refrigeration capability compared to all other common industrial refrigerants. This means that compared to using synthetic refrigerants, the refrigeration components of an ammonia chiller are a fraction of the size, saving space and lowering the cost of the initial investment.

Two further benefits of using ammonia as a refrigerant are that it is not hazardous to the environment (in fact, it is naturally abundant) and does not have to be manufactured. These, coupled with its low cost and refrigeration capacity, make ammonia the clear choice for new refrigeration systems.

With advances in industrial control systems and peripheral equipment such as sensors, ammonia’s toxicity to humans can be safely mitigated.  With closed-loop systems and fully automatic monitoring, the system can be easily operated with readily-available industrial control systems and sensors. Today’s ammonia refrigeration systems are isolated in a sealed, non-human-occupied room to contain any potential gas leaks. Sensors called “sniffers” are used to monitor the air quality in the chiller room.

ASHRAE comments, “The self-alarming property of ammonia is recognized by virtually all engineers, designers, technicians and mechanics that deal with and work on ammonia systems regularly. Thus, small leaks are repaired quickly and not neglected or dismissed as insignificant.”

If an ammonia leak is detected by plant personnel, the gas can be neutralized by throwing a wet cloth over the leak. If no one is present, the control system will engage a simple water sprinkler mechanism to cleanse the air, simply washing the effluent down the drain. 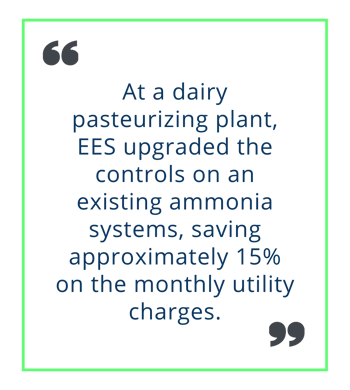 EES has designed, installed, and maintained several ammonia chillers in the pharmaceutical and food and beverage industries. There are obvious cost savings in using ammonia as a refrigerant in new systems, but existing ammonia systems can also benefit from a controls upgrade or recommissioning.

For more information or to discuss a project, please contact us.