In mid-July 2020, EES President Bruce Marson received an urgent call from longtime client Bell Works. In just four days, Bell Works was planning to begin hosting socially-distanced drive-in movie nights for the local community of Holmdel, NJ, but the company did not have a way to remotely turn off the lights in the parking lot so attendees would be able to properly view the film.

Bell Works is the reimagination of the historic Bell Labs building in Holmdel, NJ. Billing itself as a “Metroburb,” a “one-of-a-kind destination for business and culture,” Bell Works features spaces for offices, retail, dining, hospitality, and more.

Bell Works is housed on a 465-acre campus with several large parking lots and miles of entrance roads – all with 277 volt, 3-phase lighting. The Bell Works Drive-in Movie Theater is located in parking lot 3, and the client needed a remote switch to turn off the lights only in this location.

EES immediately began work on the project. At Bell Works, EES engineers quickly located and got up to speed on the existing lighting controls and designed a replacement system which would meet the client’s needs. “The existing system used contactors for switching, which would not allow for remote control of the lighting,” said Marson. “We designed and installed a system with a Cylon American Auto-Matrix controller on the Tridium platform, which we were fortunate to have in stock. Our client can now log into a website, navigate to the parking lot lights screen, and turn off the lights in all or part of the facility with the click of a button.”

The project wasn’t without its challenges. In addition to the obvious challenge of implementing a project on a painfully short timeline, other obstacles arose. Although the existing system had the various lighting regions labeled, it wasn’t until EES engineers tested the new system at dusk one night that they realized the labeling was incorrect, and probably had been for the decades since it was originally installed. “Our guys were driving around Bell Works at night testing the new system when they realized the existing labeling was incorrect,” said Marson. “They had the additional hurdle in this quick-turnaround project of going back to the original system and fixing the naming errors.”

EES successfully completed the project in time for opening night of Bell Works Drive-in Movie Theater, which proved to be very popular with the local community. Bell Works continues to present movies several nights a week, offering guests the ability to get out of the house and enjoy entertainment while staying safe.

Bruce Marson summarizes the experience. “With just four days to turn this project around, having the proper parts in stock meant the difference between success and failure for Bell Works’ first Drive-in Movie Theater presentation,” said Marson. “We were able to move quickly and be a good partner to support our longtime client and the local community.” 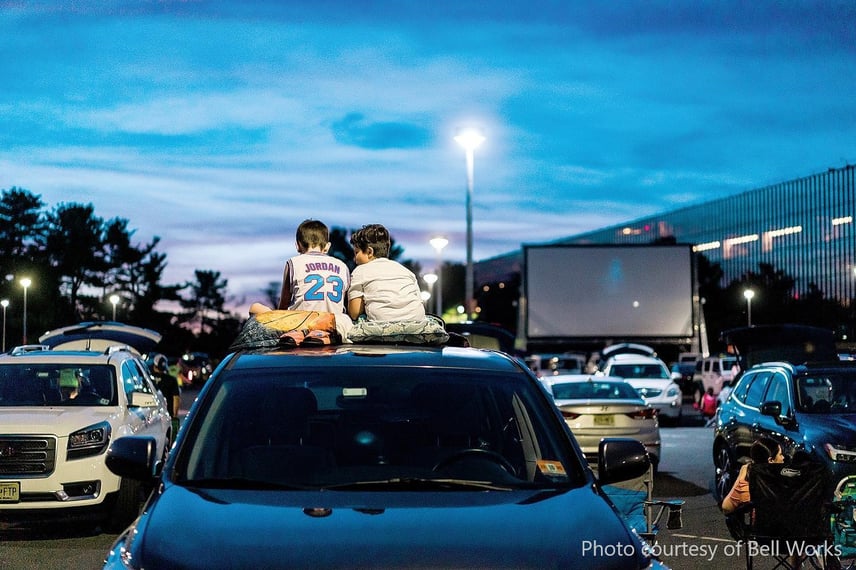